One cannot have better ground to build on. 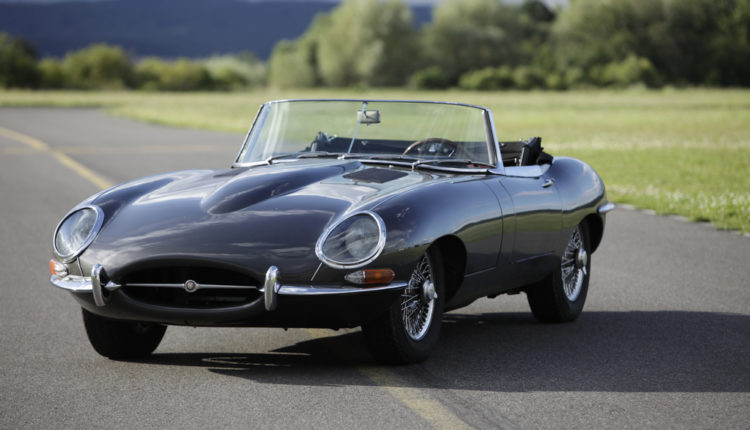 On September 4, 1922, in Blackpool, England, two young motorcycle enthusiasts, William Lyons and William Walmsley, set up the Swallow Sidecar Company to produce sidecars for motorcycles. The company continued to make sidecars until the advent of WWII.

In 1926 the company built the small Austin Seven, a “people’s car” of rather Spartan design. At this point the company changed its name to the Swallow Sidecar and Coachbuilding Co. and moved to a larger manufacturing space.

There it made custom bodies for such cars as Morris, Fiat, Wolseley, Swift, and Standard. The company’s first car, the SS1, was based on a Standard six-cylinder engine and a modified Standard chassis.

It was introduced to the public at a London exhibition in 1931. The smaller SS2 had a four-cylinder engine. In appearance the larger SS1 was a long, low vehicle with a short passenger compartment, wire wheels, and a luggage boot with a spare tire at the rear.

In 1933 the name of the company was changed to SS Cars Ltd. with Lyons becoming managing director. He bought his partner out in 1936. 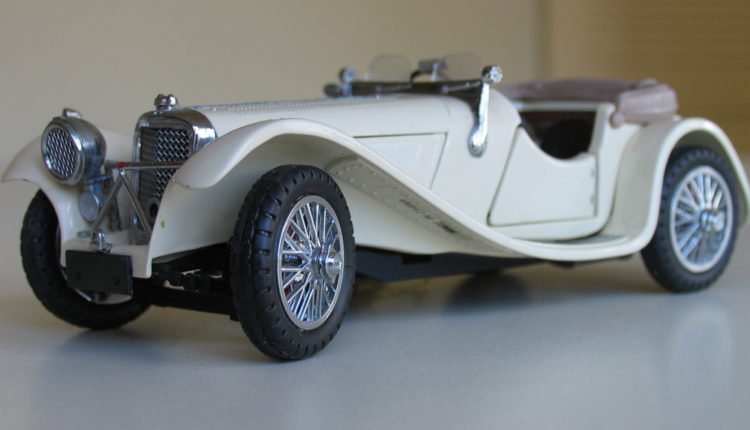 In 1934, Harry Weslake, regarded as one of the industry’s top engine experts, joined the company. His new cylinder head with OHV valve arrangement was quite reliable.

The name Jaguar was used for the first time in 1935. Also in 1935, William Heynes joined the company as chief engineer.

The firm’s production included limousines, convertibles, and sports cars fitted with 1.5-litre, 2.5-litre, and 3.5-litre engines. The most notable vehicle of the period was the 3.5-litre SS 100 model. This was the fastest and most famous pre-war Jaguar, with speeds of 100 mph and acceleration from rest to 60 mph in about 10.5 seconds.

The engine had a compression ratio of 17.5:1. Racing successes in the Marne Grand Prix of Reims, the Villa Real International event, the Alpine Rally, The Monte Carlo Rally, and the RAC Rally made this one of the most famous Jaguar cars.

During WWII, production shifted to the war effort, of course. After the war, the company’s name was changed to Jaguar Cars Ltd. and production resumed. The first Jaguars were produced with the option of left-side driving controls! 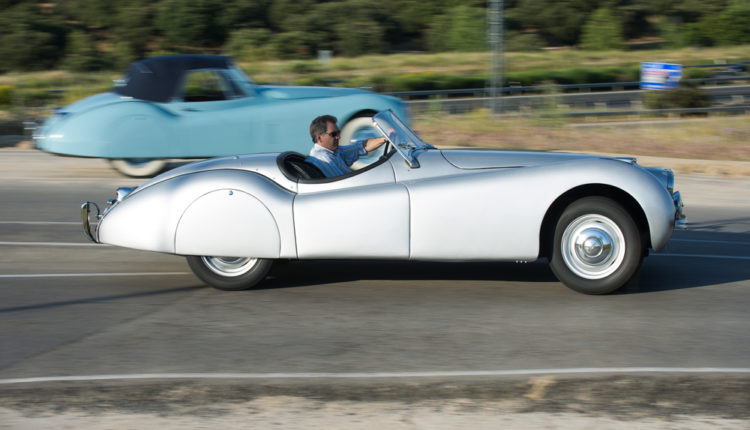 In 1946, in addition to updating the older models, Lyons developed a new sports car, the XK 120, which was inspired by the BMW 328 model and fitted with a six-cylinder x 2 OHC engine with a capacity of 3442 cc.

In 1948 at the Earls Court Motor Show, Jaguar introduced the fastest motorcar to date, the XK 120 Roadster with an alleged top speed of 120 mph, superb roadholding and styling plus a smooth ride.

In 1954 the XK 140 included rack-and-pinion steering, larger bumpers, extra chrome, a cast grill, and 190 hp. The XK 140 also had room for very small children behind the seat.

In 1957, the Jaguar XK 150 came in with a low roar because the XK design was looking slightly outdated. This excellent car, however, was produced until 1961. 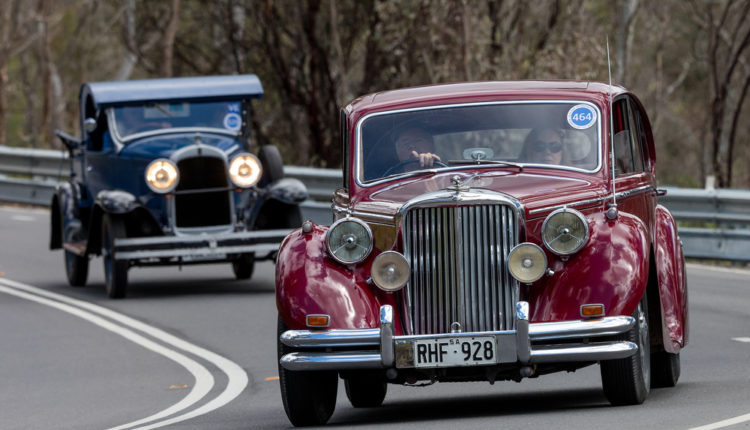 In the mid-fifties Jaguar had reached a point in its history of selling only luxury and sports vehicles. The company also sold a great deal of its production in foreign markets.

This put Jaguar in a precarious position because:

The vehicle was designed to fill their product gap and to appeal to the home market. This Jaguar was of monococoque construction which in itself was new for the company.

The Jaguar MK II evolved as an instant success with a much larger glass area and a redesigned dash. Leather seats were fitted as standard until 1967 when leather became optional to keep the base cost down. Another Jaguar classic, its fog/spot lights, also became optional at this time.

Several other Jaguar variations were produced to fill a market gap between the 3.8S and the large MK X Jaguar.

In 1960 Daimler was bought by Jaguar.

In 1966 Sir William Lyons stepped down as Managing Director of the Jaguar Group, but he remained Chairman and Chief Executive. Grice and England became joint managing directors. On July 11, 1966, Jaguar Cars Ltd. and the British Motor Corporation Ltd. announced they would merge.

Also by the mid-60s, hind-sight could see that Jaguar was beginning to make too many models. 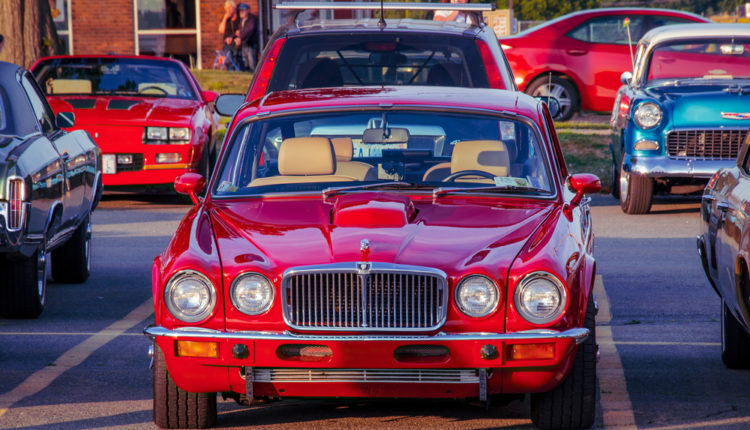 In 1968 a merger with Leyland formed the largest British car complex.

In 1972 Sir William Lyons retired, 50 years after forming Swallow Sidecar Company on his 21st birthday. His retirement was followed by a period of confusion and confusing changes at Jaguar. Whole departments, such as sales and service, disappeared into BL power.

The Ryder report, partially published in 1975, made it clear that Jaguar would not continue as an entity. Leyland Cars was formed and the brand new Jaguar XJ-S was thrown in with BL’s other Earls Courts motor show offerings.

There was no single head man at Jaguar and the winter of 1979-1980 saw Percy Plant as nominal chairman of Jaguar. Plant was mainly known for his skill at closing factories.

Morale among workers dropped to a low point in April of 1980 when a strike over grading and pay provoked Sir Michael Edwarde’s ultimatum “return to work or lose your jobs.”

Jaguar needed a boost as never before. It also needed a full-time chairman. Enter Jaguar’s new full-time chief executive John Egan in April of 1980. He came from parts directorship of Massey Ferguson Construction and Machinery Division. He was 40 years old, the “new blood” Jaguar so desperately needed.

Egan’s first quote was, “One cannot have better ground to build on.”

He definitely brought an air of optimism and new life to Jaguar that was soon reflected in production and morale. By 1985 it was clear that Jaguar was stable once more and that Jaguar people do not give up!

Some stats & details on famous Jaguars through the years:

How Moms Can Find Scholarships For Grad School In 2022