Will have your kids singing, dancing, clapping, wiggling, learning, communing, and having fun! 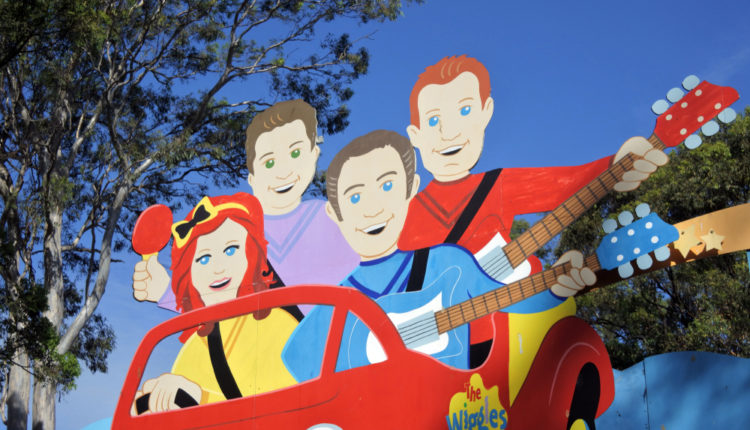 The Wiggles love children and their love shows. They will have your kids singing, dancing, clapping, wiggling, learning, communing, and having fun!

The costumed Wags the Dog, Henry the Octopus, Officer Beaples, Dorothy the Dinosaur, Captain Feathersword and others costar with four Australian guys (Greg, Murray, Anthony, and Jeff) who sing, play the guitar, the accordion, and the keyboard while teaching, dancing, and wiggling right on into your kid’s heart.

Three of these four guys met while studying early childhood education. Their first album was published in 1991 and it has been an uphill success story for them ever since. As a touring band, the Wiggles have kept in contact with their public and that has fueled their growth. However, the real secret to their success is that they love children and they have obvious and uninhibited fun entertaining those children. In  return, young kids, almost without fail, adore the Wiggles.

Parents are pleased with the Wiggles, too. Parents recognize and appreciate the educational value as well as the societal values these guys and their entourage impart. Michael Fitzgerald wrote for Time Magazine, “The Wiggles promote social behavior, urging children to engage with a world that is becoming increasingly virtual.”

Although the songs are exceptional with a few good Aussie words (educational in itself) and enough repetition to get kids hooked, the vigorous action is another attraction. It gets kids off the couch, moving, wiggling, learning, and laughing.

That action is the reason the videos are a better first buy than the audio CDs. Certainly do purchase a couple of well-loved CDs for the car but first purchase and watch the visuals. Follow with the CDs and your kids will be wiggling away in their car seats–singing, clapping, and having a blast!

While some older kids will enjoy them a few times, The Wiggles are best for babies through first grade. Not even an adult can stay around these catchy tunes, though, without humming a few the rest of the day. It’s a terrific way for the entire family to sing and dance and wiggle around like silly nuts.

The Wiggles are the Australian answer to Barney complete with the same or similar plots, bold colors, and slapstick comedy–even Dorothy the Dinosaur. However, the Australians seem to do a better job of it.

Most publications have 12-16 songs in VHS tapes or DVDs and run about 40 minutes–some longer, some shorter–except for The Wiggles Magical Adventure which is 70 minutes of wiggly fun. You can also buy audio CDs for most releases.

Many of the VHS-DVD publications, such as Wiggle Bay and Cold Spaghetti Western, have a story to tell as a bonus to the music and interactive entertainment. Most of the DVDs have some extras (not included on VHS) such as extra songs that make them worth the slight additional cost.

Another Big Bonus: Try showing The Wiggles in late morning or early afternoon. It almost guarantees your little one will take a nice, long nap!

To sum it up: My opinions with reviews following…

Wiggle Time or Yummy, Yummy are great introductions to the Wiggles. Even the youngest family member will wiggle along. They are also good CDs.

Cold Spaghetti Western is an absolute hoot! We love it!

Wiggly Wiggly World is a world full of friends and cultural diversity. Great CD, too!!

Hoop-Dee-Doo and Wiggles Magical Adventure are two of the best for older children.

Top of the Tots and Wake Up, Jeff, while still good, seemed a bit slower than the others.

Wiggles Space Dancing and Wiggly Play Time did not seem up to par in my family’s opinion. They are good ones to skip unless you are Wiggles’ collectors.