The elements of a home (including all external building materials, windows, and walls) that enclose the internal space is known as the building envelope, enclosure, or shell. 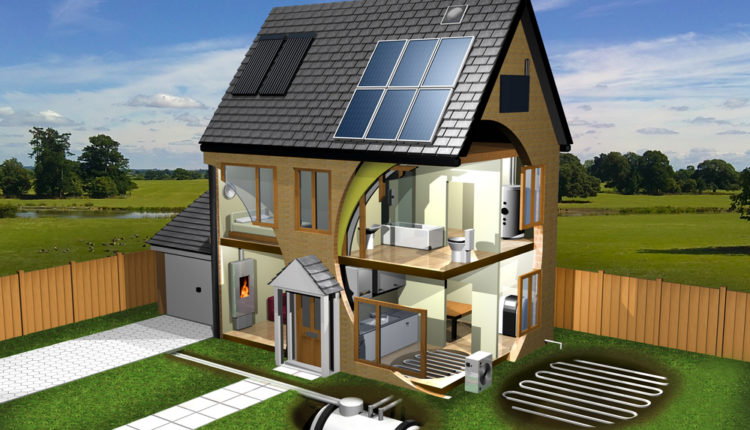 Building Enclosure of a Green Home

The elements of a home (including all external building materials, windows, and walls) that enclose the internal space is known as the building envelope, enclosure, or shell.
The envelope serves as the outer armor to protect the indoor environment as well as to facilitate its climate control.

There are three parts to the building envelope. Although the parts are quite different from each other, they interact and comprise a physical system:

The components of the building envelope are:

Borders defining where the exterior environment ends and the building envelope begins might be confusing, particularly when buffer spaces such as attics, garages, and crawlspaces are considered.

For a high-performing building, the envelope controls heat gain in summer and heat loss in winter. It should be equal in importance to the structural frame in terms of design consideration while taking properties of the envelope into account such as the function, position, dimensions and orientation.

The thermal envelope refers to the thermal insulation within the building enclosure.

The purpose of envelope insulation is to provide a continuous thermal barrier to minimize heat flow through the walls, ceiling and floor. Insulation serves to keep a home comfortable and reduce costs for heating and cooling.

The home will not be as comfortable and energy costs will be increased if sufficient insulation is not installed and installed correctly. Although it is not difficult to install insulation accurately, it often is installed incorrectly, such as being compressed or installed with gaps.

1. Provide a continuous barrier between the inside conditioned space and the outside,

2. Be installed to the proper R-value,

3. Be installed without gaps,

5. Be properly labeled or be proper depth to indicate proper R-value.

6. Insulate correctly for the climate in which it is being installed.

The purpose of the building envelope is to ensure the thermal, visual, and sound comfort of the rooms in a home with a minimum of energy consumption.

It is certainly important for energy efficiency but it is just as important for the health, comfort, and well-being of the family living in the home. Since the interior environment relates to the physical needs of the family in residence, it is defined in terms of temperature, relative humidity, airflow rate, and air quality.

The exterior environment of a home can be modified and comfort increased when the green architect designs around existing trees and vegetation, plantings, prevailing breezes, windbreaks, and the soil itself. Garages, overhangs, site orientation, and even the surrounding homes modify the building envelope. particularly in the case of low-rise buildings. They must be considered to design a high-performing home.

1. A roof overhang modifies the amount of rain on the wall below. It is a microclimate modifier for the vertical portion of the building enclosure.

2. An attached garage is not conditioned indoor space nor does it experience outdoor conditions. Rather it incorporates both the exterior wall of the house and the garage wall, with the space between containing the car and other objects stored in the garage as an integral part of the enclosure.

3. In conditioned room (s) over a garage or carport, the garage ceiling would be considered part of the building envelope and changes in that ceiling will modify the envelope.

4. Ivy growing on a home wall is part of the envelope. It has significant impact on moisture.

5. Adjacent buildings are also modifiers. Think of the side-neighbor’s home which shades your west windows.

Other components such as lights and stoves plus space contents also modify the interior environment and thus the comfort of the user.

The thermal envelope and the building envelope are not always the same.

Solar reflectance is a decimal number less than one that represents the fraction of light reflected off the roof. If a high reflectance material has a value of 0.70 (70%), only 30 percent of the light from the sun is retained by the roof.

Solar reflectance is the most important characteristic of a roof product in terms of yielding the highest energy savings during warmer months. The higher the solar reflective value, the more efficient the product is in reflecting sunlight and heat away from the building. This reduces the temperature of the roof.

Think of the effects of dark versus light clothing on a sunny day. Because dark colors reflect less solar energy, dark is hot and light is cool. The same principles apply to roof temperatures. Light-colored roof materials make for a cool roof by reflecting more of the sun’s rays.

Infrared emittance is a decimal number less than one that represents the fraction of heat that is re-radiated from a material to it’s surroundings. The emittance of a material refers to its ability to release absorbed heat. One example is a metal tool left in the sun. It is hot to the touch because it has a low emissivity value.

Emissivity can also contribute to a cool roof in warm, sunny climates like Dallas-Fort Worth. Roofing products with high emissivity can help reduce the cooling load on the building by releasing the remaining heat absorbed from the sun.

For buildings dominated by cooling loads, it makes sense to provide roofing products with high reflectivity and high emissivity. These products help reduce cooling loads because the roof is exposed to the sun for the entire operating day.

Caveat: Because roof coatings tend to lose their reflectance properties over time due to dust and dew, regular cleanings and even reapplications are needed.

A Tiny House: The Affordable Way to Live Your Family’s Dream…