Living with Teenagers and Adolescents 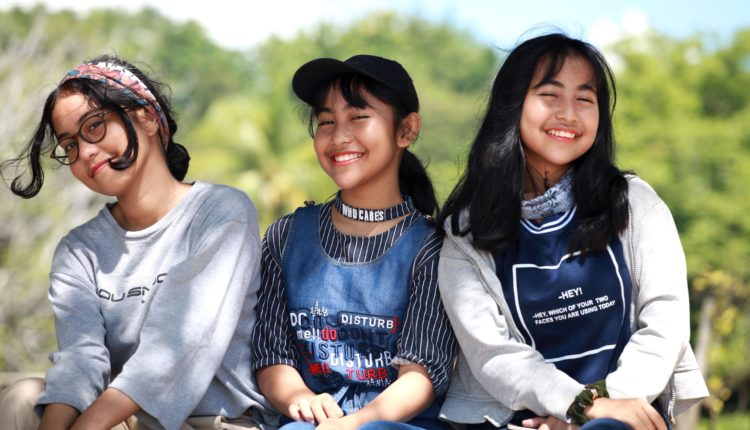 Roll with the Punches

You may remember your teen years as the best years of your life. This is an adult nostalgic view of the world. Don’t be surprised if your teenager does not agree with this description. Adolescence is a frightening and troublesome time with many struggles. Many things are happenings to worlds, bodies, friends, and family. The basically small, safe, secure world of the child is suddenly growing to be the large, unfamiliar world of the near adult. In addition, hormones and mood swings are raging for teenagers. Teens need to separate from their parents in all ways:

Living peacefully with teen-agers often requires parents to roll with the punches.

If you do not let go and allow your teens to do this, they will rebel. You leave them no choice. However, think about it. You don’t want them hanging around, dependent, and unable to make a decision at 40 years of age, do you? It is both normal and necessary that that teens move away from parents.

Start with the early teens and let go of the unimportant things such as hairstyles, music, clothing, and behaviors that mimic the behavior of their peers but possibly annoy, embarrass. or offend you or other adults. Be prepared for adolescents to depart from your value system, even your religion, as they try out and eventually find their own place in the world. Parents can and should still limit dangerous behavior, of course. Before nay-saying to a teen, though, stop to ask yourself, “Is this really dangerous or is it behavior that is against my personal value system or religion? Is this really dangerous or mildly to very embarrassing to me?”

“Is it dangerous for my teen-agers to explore the religions of the world, even visiting a mosque or temple regularly while they are exploring? Or… am I afraid they will leave my religion of choice?”

“Is their chosen style of dress really dangerous? Or… am I embarrassed for _________ (you fill in the names here) to see my son and daughter in such a garb?” Does it make me look like a parent with no sense of responsibility? Will people think I am a wimp and can’t even control my own kids? Isn’t it amazing how often we forget our own teen years? All the boys my age wore their hair long, long, and stringy. Drove their parents crazy.

They ranted, “It looks like a girl; it looks dirty; it’s embarrassing for Grandma, the preacher, the boss, and the neighbors to see.”

It is not about hair or jeans; it is about independence

Parents of boys my age tried every approach but I never saw them work. Girls suddenly wore jeans everywhere. Parents grieved over the loss of dresses and what they saw as a lack of appropriate attire or even a lack of feminism. Think back to the teens in your generation. They did something, and usually more than one thing, that drove their parents up the wall. More than likely, you participated, too. Be assured that your teen’s generation will keep trying until they can get some reactions from parents and/or other authority figures. Long hair doesn’t bother you? How about a shaved head then? Jeans don’t bother you? How about wearing men’s boxer shorts in public? Or jeans that are one inch away from falling off at all times? Or skirts that are one inch away from panties? You get the picture. It is not about hair or jeans; it is about independence, becoming a “real” person, and often, becoming “just like the kids at school.” Peers will become the most important part of your teens’ lives. Your attempts to make it less so, will only make it more so.

All curious (and don’t you hope your children will maintain an avid curiosity throughout life) teens will go about the exploration of life. Your attempts to make a curious teen adhere to your value system, your religion, your politics, etc. will only make the other side seem more interesting.

How much better to celebrate their curiosity and help them explore. You will both learn something and you can be seen as a “partner in crime” rather than the opposition. Often partners in crime get a chance to summarize the results while parental opposition produces a deaf ear or out-and-out opposition in an adolescent.

Another truism: teens rarely need you as a buddy. Therefore, just hearing you are going to help them explore an issue could make them decide to explore something else.

Roll with the punches; it’s the only way to go and survive the years of adolescence.

Take a genuine interest in their lives. Listen without lectures.

One parent told me that she always got up early on Saturday morning to sit in the living room and read. Her children knew they could come to her then for leisurely and non-judgmental talks. No matter what was revealed, Mom kept her cool, never fainted and fell out of the chair, and never, ever lectured.

Listen without feeling like you have to take part in their interests.

For example. A child develops an interest in yoga; you don’t have to take up yoga yourself. But you can learn a little about yoga, perhaps. You can certainly encourage this interest. But most of all, you can listen.

Adolescents, just like all humans, build self-esteem by assuming responsibility for their own lives. Real consequences teach responsibility better than any lecture.

If your adolescent forgets to take care of his/her clothing, let it go dirty and/or wrinkled. If that is not the style of the day, peers will do a much better job that you ever could of reminding your teen of unacceptable behavior. And so on.

Just as with children, you can not constantly say, “No.” Choose your battles wisely, both for importance and for timeliness.

Most of the things they are doing now: mumbling, never saying “please” or “thanks,” skipping church, distancing from family, leaving rooms messy, wearing outrageous clothes and hairstyles, etc. are not the way they will act forever. If you taught them right from wrong and instilled your value system when they were younger; they will come back to most of the things you have taught them when they are older.

You are quite naturally concerned. Maybe you even decide to do something about it. You probably will make matters worse with lectures, punishments, and tales of eternal damnation.

How much better to expand your own knowledge of other religions and discuss the things all religions have in common with your teen. If he/she is are ever coming back to your religions beliefs, he/she is much more likely to do so when you appear open to other religions, also, and most of all, open to your teen’s ability to make this decision on his/her own.

The same is true for politics, philosophies, and all those “isms” that are near and dear to parents’ hearts.

They no longer need you as a “buddy.” Believe me, it is embarrassing for them to have a parent who acts like a kid or teen, too. They need a parent who still acts like a parent, albeit a more compromising and understanding parent.

Note: The opinions expressed herein are exclusively those of the writers or other participants and do not necessarily reflect the position of CyberParent, LLC. They are not intended to take the place of advice from a health, legal, or other professional whose expertise you might need to seek.