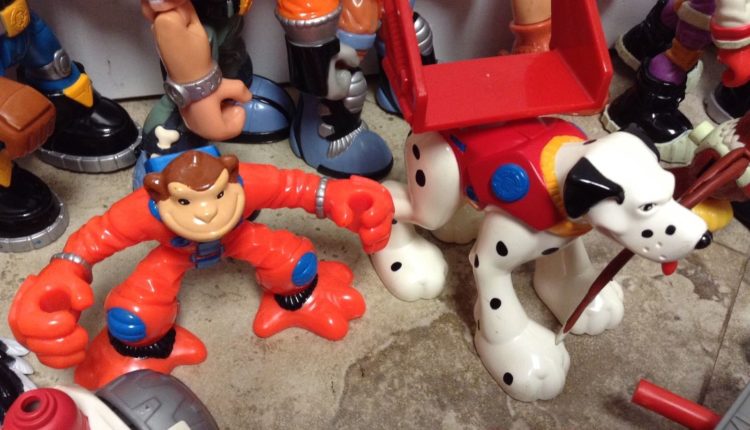 There is a reason for these big feet–they add stability and make the figures stand up.

What do with all those extra Billy Blazes figures? Well, one at Grandma’s, one at the babysitters, and one makes a nice present for the kid down the street. Or maybe just have a whole firefighting team…

Al Pine with Arctic Tracker and his dog sled team, Snow and Winter, cover many miles of snowy mountains to track down snowbound skiers or climbers. While Al’s amazing Arctic Tracker starts out as a state-of-the-art dog sled, it easily converts to two vehicles: a snowmobile and rescue sled! So the dogs can transport victims to safety on the rescue sled while Al rides along on the snowmobile. This one is best for older children as it is somewhat fragile.Buy this figure

Back Hoe, a lava squad rescue robot, scoops up rocks and rubble to clear a path and reach trapped victims. Back Hoe?s backpack turns into a heavy-duty shovel that flips over his shoulders to heave loads of rocks and lava. Back Hoe also has a tool arm with a drill to cut through obstacles. Buy this figure

Bill Barker and his ATV get calls leading them anywhere-into the mountains, across the desert, or just down the road. That’s why these quick-response specialists rely on their All-Terrain Vehicle. It comes equipped with a tow winch to assist stranded motorists or pull off daring, lifesaving rescues. There’s also a handy stretcher that folds out to transport injured victims and a backpack holder so the Rescue Heroes can attach any of their tools right to the vehicle.Buy this figure

Billy Blazes and Firetracker. Billy comes to life at the controls of his Fire Tracker™. Just fit his hands onto the handles, press the button and watch him move back & forth as he “drives” the Fire Tracker to the rescue and douses the blaze fast.Buy this figure

Billy Blazes and Bi-Pod Jet fly to the rescue. This jet needs no runways or landing gear so it can land on a mountaintop or pop right down on the site of an earthquake. Push a button and watch the transforming action as the plane’s rear section becomes a set of robotic legs. Flip out the arms under the jet’s nose and two spring-loaded claws are set to clear rubble or rescue injured victims. Carry handle for flight simulation.Buy this figure

C.D. Moon and Moon Tracker come to life as they power their own rescue vehicles! C.D. Moon™ comes to life at the controls of his Moon Tracker™. Just fit his hands onto the handles, press the button and watch him move as he “drives” his vehicle in and out of craters to explore astronaut crash sites or alien sightings. Buy this figure

Clamp Down, the Police Patrol robot, turns into a vehicle to speed to the scene of a crime or accident. In case of emergency, Clamp Down uses his big battering ram to open up the path to rescue. Clamp Down is a fast, strong, and fearless crime fighter! Buy this figure

Lava Squad Billy Blazes moves in to make rescues and save lives when any one of dozens of active volcanoes around the world erupt. Billy Blazes leads the team rescue action with his amazing dual water blob launcher to cool the molten lava and put out raging fires.Buy this figure

Bob Buoy with Water Flare Launcher rescues on the ocean. When oil tankers break up and mariners are swept overboard, Max-Action Bob Buoy races across the ocean and shoots out his rescue buoys. Bob’s buoys guide lost vessels back to port and give struggling swimmers something to hang onto until the rescue boats arrive. Buy this figure

Bob Sled and Snowmobile get there fast! Bob Sled plows through giant snowdrifts and over dangerous crevasses to reach stranded skiers, snowboarders and snowmobilers. Bob’s rugged snowmobile is the perfect vehicle to rescue avalanche and frostbite victims on the high peaks. Buy this figure

Cliff Hanger is the Air Rescue Specialist. Push a button on the top of his glider backpack and out pops his hang-glider-like red wings.Better yet, this pack is removable and can be worn by some of the other Rescue Heroes figures. Buy this figure

Gil Gripper and Submarine rescues in the water. Gil Gripper sails beneath the seven seas to save swimmers, sailors, and divers in distress. Gil maneuvers his Mini Sub through coral reefs, shadowy shoals and ancient sunken galleons to make daring underwater rescues.Buy this figure

Hal E Copter and Helicopter hit the scene fast. As a member of this elite Rescue Heroes squad, Hal E. Copter uses his Mini Copter to pop onto mountain tops, over cliffs, boulders and other obstructions to make those hard-to-reach rescues. He pulls out his rear winch hook to pick up stranded victims and airlifts them to safety.Buy this figure

Jack Hammer with Claw: When a volcano erupts and victims are trapped or obstacles need to be removed, Jack Hammer reaches in with his rescue claw gripper to grab hold. This excavation expert has the training, experience, and courage to get the job done and bring volcano victims to help and safety.Buy this figure

Jack Hammer with fliptrack dozer comes with this unique moving vehicle powered by Jack Hammer. Jack Hammer™ comes to life at the controls of his Fliptrack Dozer™. Just fit his hands onto the handles, press the button and watch him rotate his arms to power the dozer over rubble and debris to clear a path to the rescue scene.Buy this figure

Jack Hammer with saw, an exciting action tool that lights up when you use ’em! When raging floods wash out bridges, Jack Hammer rushes to the scene with his illuminated saw to help build pontoon bridges and rescue victims. Working throughout the night, Jack uses his light-up saw to make new bridge beams and cut through the rubble to reach stranded families. Kids can help Jack Hammer activate his spinning, glowing saw by pressing the plunger on his backpack tool.Buy this figure

Jake Justice with Police Patoller comes to life as he powers his own rescue vehicle! Just fit his hands onto the handles, press the button and watch him move back & forth as he “drives” his vehicle on patrol or to the rescue scene.Buy this figure

Officer Justin Time is always there with his Giant Cuff–just in time. Whenever you need him, Justin Time has gotcha covered! He leads his team into the thick of danger to catch criminals in the act or save accident victims– just push the button to shoot out Justin’s tethered cuff !Buy this figure

Marshall Law steps in when a crook is on the run. When a bank has been robbed and crooks are on the run, Marshall Law tracks them down and wields his handy grappling hook. Just push the button and the grappling hook shoots out to catch a thief or pull an accident victim to safety. There’s no chance for any crook when Marshall shoots his grappling hook!Buy this figure

Perry Chute and Hang Glider Sail high above the forests and rivers, patroling the wilderness to rescue lost hikers, hunters and flood victims. Perry Chute flies his big Parasail into some of the most remote and dangerous locations in the world, gliding in fast!This is best for older or very careful children as the hang glider is somewhat fragile. Buy this figure

Rex Steel with Wrecking Ball is on the spot when fires break out or earthquakes hit and people are trappedinside. Rex’s big ball knocks out bricks and rubble opening up an escape for disaster victims and a way for rescue workers to reachthem!Buy this figure

Rip Rockefeller and Excavator come to the rescue quickly. Rip Rockefellerwields his powerful Mini Excavator to dig through rubble and rock to rescueearthquake victims. Rip’s big spring-loaded bucket scoops out tons of stuff toreach people trapped under collapsed buildings or avalanches.Buy this figure

Rock Miner with light up drill helps cave explorers and geologists when they are trapped underground. Rock Miner bores into the cave walls and rocks with his high tech illuminated drill. Kids can help Rock Miner activate his spinning, glowing drill by pressing the plunger on his backpack tool.Buy this figure

Sam Sparks and Snake Can help firefighters. When fire breaks out and property and lives are threatened, Sam Sparks shoots his big water blaster into the flames. Sam’s fast water bomb action gives firefighters time to race to the scene and save people and pets trapped inside.Buy this figure

Sandy Beach with Disc Launcher helps in water rescues. When typhoons tear across the ocean and swimmers are swept out to sea, Sandy Beach races to the scene with his rescue life ring launcher! Sandy’s life rings shoot out to reach struggling swimmers and kids with cramps.Buy this figure

Seymour Wild with Boomerang Launcher rescues when dangerous desperadoes or wild animals threaten travelers, hikers and nature photographers. Seymour Wilde flings his flying and amazing boomerang that stuns and scares off tigers and sends poachers running for the high grass.Buy this figure

Most Rescue Heroes are good for children 3-8 if attention is paid to small parts.